skip to main | skip to sidebar

We may not have made the Azores, as we had intended, but we have been to some fabulous places, eaten great food, met lovely people, and, after the ‘rain in Spain’, it’s been wall-to-wall sunshine.

When you escape from the Solent, sailing changes. No longer is there a mad panic to get to the marina just to get a berth. No longer do you hear the long-suffering Coastguard respond to yet another radio check. No longer are you constantly dodging ferries, coasters, power boats and yachts. Life slows down. Calm returns. Even nature seems more relaxed.

Certainly heading west from Dartmouth is cruising heaven. There are so many rivers, coves, and bays to explore, sometimes in the company of another cruising boat, often just with the locals. We made the most it. We stopped first in the tranquil Yealm, it’s halcyon waters reflecting all above. We too, shared it’s mood, and sipped a glass of wine. 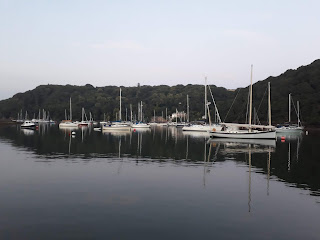 We found ‘Tashana’ tied up mid-stream in Fowey, and gave David a cheery wave as we passed close by. He was there for Classic Week. We caught up with old sailing club friends Chris and Kathy, now living in Looe, and shared a meal whilst enjoying the sun setting on the river. 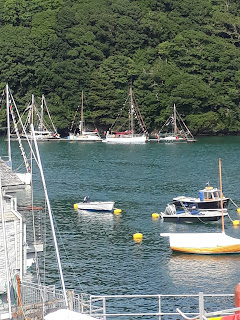 One of the joys of cruising is looking around the places you go to, enjoying the walks, views along the clifftops, and visiting the sites of times long past. Falmouth has a lovely atmosphere. It has it’s fair share of trendy seaside shops, but it has managed to keep it’s quaint and quirky local ones too. There’s also a healthy sprinkling of interesting galleries and shops all mixed in with the traditional local shops that you would expect in the high street.

Keeping a ‘watch’ on everything we do on the water is the Coastguard, and, whilst walking around the headland, past Pendennis Castle, it was good to find Falmouth Coastguard Operational Centre (CGOC) still perched on the cliff overlooking the sea and Carrick Roads unlike poor Solent Coastguard, the only National Maritime Operations Centre, who only see trees now they have been moved inland! 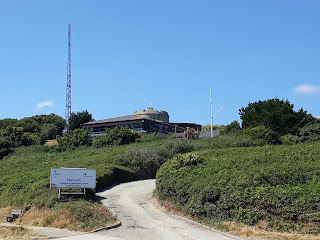 Time is running-out and soon we must turn East and head home. The Helford River is always a pleasure, but we slip out and head a few miles further south down the Lizard Peninsula, and drop the hook in Coverack Cove. The harbour clings to the rocks on the southside; it’s water draining out each low tide. Rocks are strewn around the tiny entrance, and many more litter the small beach, but in the cove the water is turquoise, and crystal clear. I watch as a cloud of sand puffs-up as the anchors drops the five meters to the sea floor. 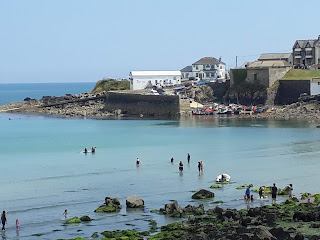 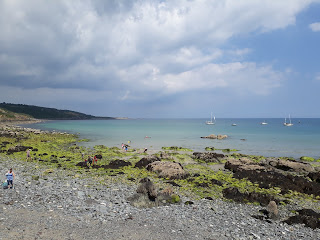 The sun has just crept over the horizon to illuminate the bay. The chain rattles and the anchor resists leaving its soft sand bed. It’s time to turn East – to head homewards. As we leave the bay, the dolphins come to play….. 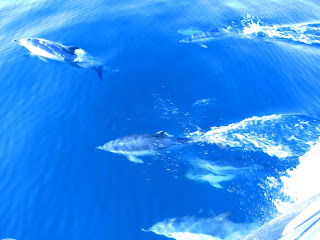 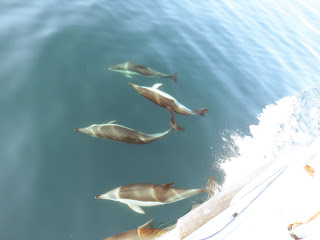 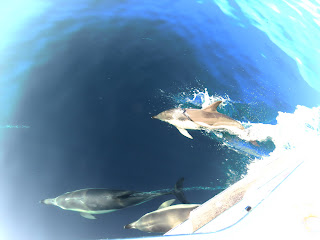 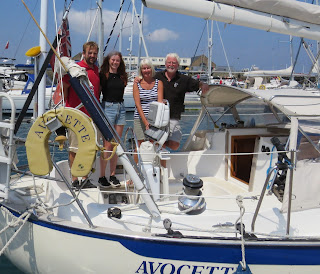 We had enjoyed beautiful anchorages, and sailed the stunning, rugged, coasts of North and South Britanny. Sometimes we ghosted along in the merest of zephyrs, occasionally we sailed in a good breeze. We had anchored in secluded bays, in turquoise water, amongst tiny islets, and off wonderful beaches, in beautiful weather. At Audierne though, the clouds built-up and blotted out the stars. The night went dark, then the rain hit like a hail of bullets, the rigging sung to the wind, and we felt the anchor snatch repeatedly, lightning flashed, and thunder clapped, the thirty knot gusts swung the boat through 180⁰ and back again! Then, as quickly as it came, peace and quiet returned.

It had been a cracking week. Munch and Zoe, were always impatient to sail, and sail we did. Avocette’s sails were tweaked and cajoled to get every fraction of a knot out of the light winds as we headed back up the Channel du Four. In truth though, it was the engine that had to do most of it. Night fell as we passed L’Aber Wrac’h, and we counted off the many lighthouses on the Brittany Coast. Watches changed and the miles slipped by. Finally Guernsey hove into view. It was time for them to return home, their week at an end. Thanks guy’s, you’re welcome back anytime.

It’s always nice to hear from friends, and a txt ‘Do you need any crew?’ from Clive & Denise, saw us heading out early the next morning to catch the tide down to Jersey to meet them from the airport. 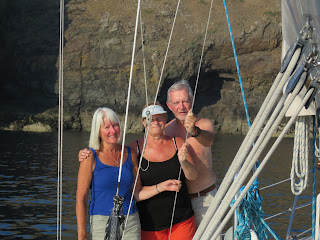 We woke to fog, and the clanking and grinding of cranes loading a coaster on the next dock, so slipped out of St Helier into the merk, and headed for the secluded bays, and car-free roads of Sark. There are four way’s of getting around Sark – walk, cycle, horse and cart, or tractor. Not able to hire bikes, or a horse and cart, in the secluded anchorage, we walked - then hitched a lift on a passing tractor! 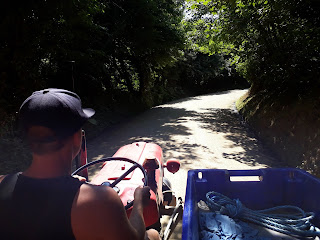 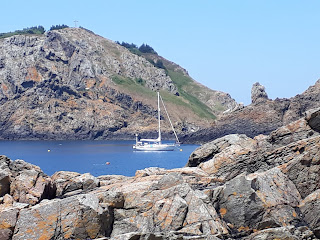 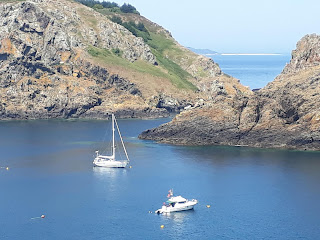 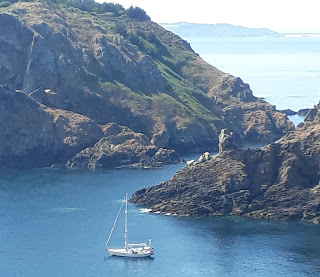 Idyllic Islands in the Sun

At last the fine weather settles in. Each day is, like England, wall to wall blue sky and sunshine. Sadly it is time for John to return home.

The new crew are flying up from Lisbon and we head into La Rochelle to pick them up. Munch and Zoe are a bundle of laughs, and good sailors too, so it’s a pleasure to have another two Portsmouth Sailing Club members on-board. It doesn’t take long for them to settle into ship board life, and we enjoy a cracking sail up to les Sable d’Olonne for them to see the Golden Globe entrants. 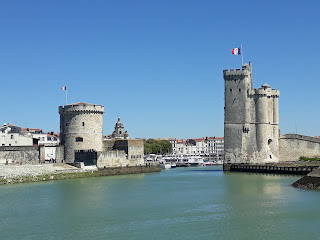 Slipping back to sea we reach across the fifty-odd miles to Belle-Ile. Dropping anchor between the rocks in a small inlet, on the south side of the island, was accompanied by a cheery wave, and a shout of ‘Welcome’ from the French boat, already snug at anchor in the prime spot. It’s beautiful, only by the cries of the gulls, nesting on the cliffs, disturb the peace as the sun sets on a perfect day. 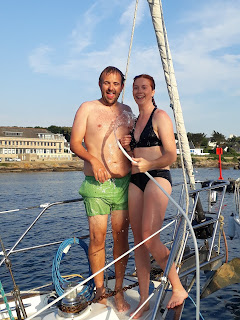 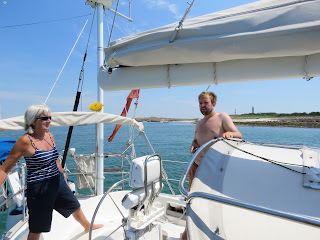 The winds are light the next day, the sun hot, but with a little help from the trusty ‘iron top-sail’ we make Concarneau, just in time for a quick swim, and a welcome pint (or two). The marina’s full. It’s change-over day for the local sailing school, but we’re snug moored on the pontoon. Too snug, it turns out. The beam breeze pins us firmly onto the hammerhead, and it is only the help of the friendly Harbour master, towing us off to windward in the morning, that lets us escape to the beautiful Iles de Glenan. Like tiny Caribbean Islands, but without the palm trees. 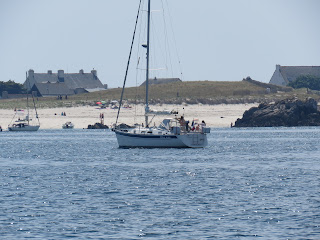 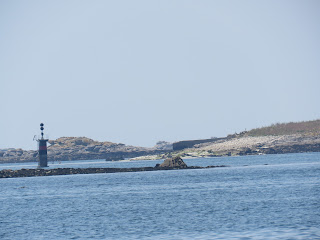 Working our way in between the rocks we nudge in towards a beach on one of the many small islands, some not much more than a rock with a beach! Others have got there too. I three metres of water, we drop anchor on a patch of sand, and it’s not long before we’re swimming, Munch and Zoe striking out for the shore.
All too soon it’s time to leave, Audierne, and 'The Raz' calls… 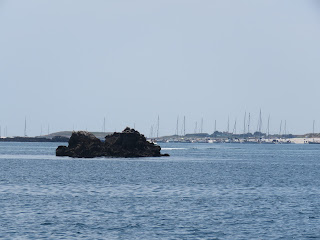 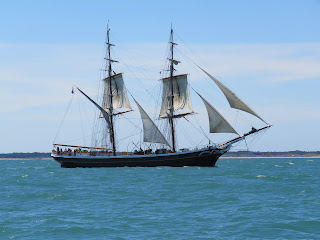 The sky was blue, the sun shining, and the sail, a fast beam reach in the 18, gusting 23kt breeze. Avocette was in her element . At 8 ½ kts, the miles wizzed by. It was the best sail of the trip! A Dutch sail training ship waved a cheerful hello as our paths crossed in the shallow channel of Pertius Breton to the north of Ile de Re. 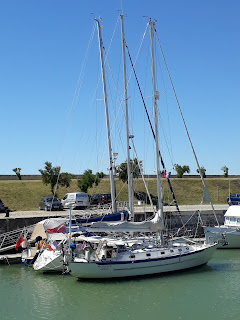 The picturesque St Martin-Le-Re's harbour dries, but there is also the Bassin a Flot which was almost empty when we arrived and rafted alongside a friendly French couple. The lock gates were shut soon after, only to reopen the next day – the Harbour master only works daylight high tide +/- 3hrs. The next day being a Saturday, it was reminiscent of Cowes just before the Round the Island Race. Boats poured in the moment the lock-gates were opened. Chaos was expertly managed by the Harbour Master. The harbour filled. Rafts of five and six boats filled the Bassin. It made Yarmouth on a sunny bank holiday look peaceful! 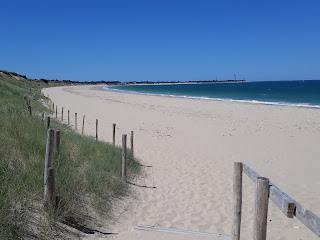 Ile de Re is very flat. There are probably more bicycles than people, and the beaches are beautiful. Cafes, bars, and restaurants line the quay’s. The smell of Huitre’s (oysters) and all manner of shellfish wafts over the boat – perhaps a glass of Muscadet id called for…… 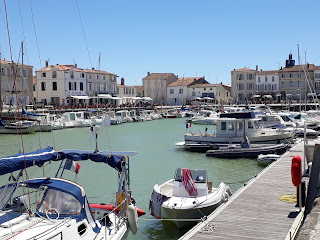 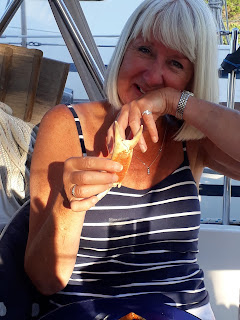 Gail awakes to find flowers on the saloon table, and a basket of croissant, Danish pastries and pan-a-chocolat – well done John!

Lunch at a Michelin restaurant with our neighbours from Ocean Gem, the boat alongside, as it’s Eileen’s birthday too! To round off the day, as if that’s not enough, John cooks-up a spider crab with fresh oysters for supper! What a day!!

Finally we leave Les Sables, and have a cracking beam reach sail the thirty miles to Ile de Re, a beautiful island just outside La Rochelle. 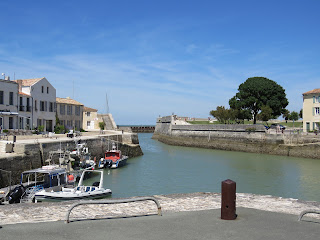 We sail the rhum-line for La Rochelle, but encouraged by a txt conversation with Robin Knox-Johnson, we change our minds, to join him as he sails into Les Sables D’Olonne for the festivities building up to the start of the Golden Globe Race; a race he originally won fifty years ago.

Frustratingly, the light winds delay our arrival, and after sailing 290 miles across Biscay we miss the parade by two hours, but then that’s sailing for you. That afternoon the festivities start. All the skippers are introduced, their boats are on show. 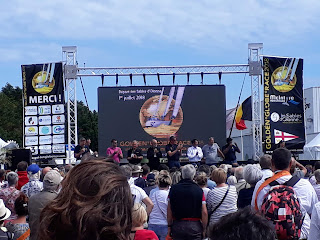 A pot-luck supper with the Cruising Association sees twenty of us enjoying an evening in the marina gardens.
Posted by Chris Smith at 17:48 No comments:

The Rain in Spain Falls Mainly on Us! 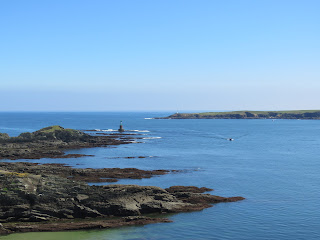 Whilst John got lost in Luarca, Gail and I tramped the headland around the entrance to Ria de Ribadeo.
Blue skies and warm shine made a wonderful change to the damp and windless days of the last fortnight.

The rugged coastline hides beautiful coves and bays, and all the colours of the ocean floor can be seen through the crystal clear water. On the clifftops, the wildflower meadows are filled with butterflies, swallows swoop low, and swifts wheel and screech overhead. We have enjoyed the northern Rias, but we want to move on.

The winds remain very light, Biscay beckons, and we slip our lines for La Rochelle – in the rain! 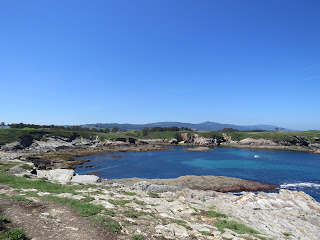